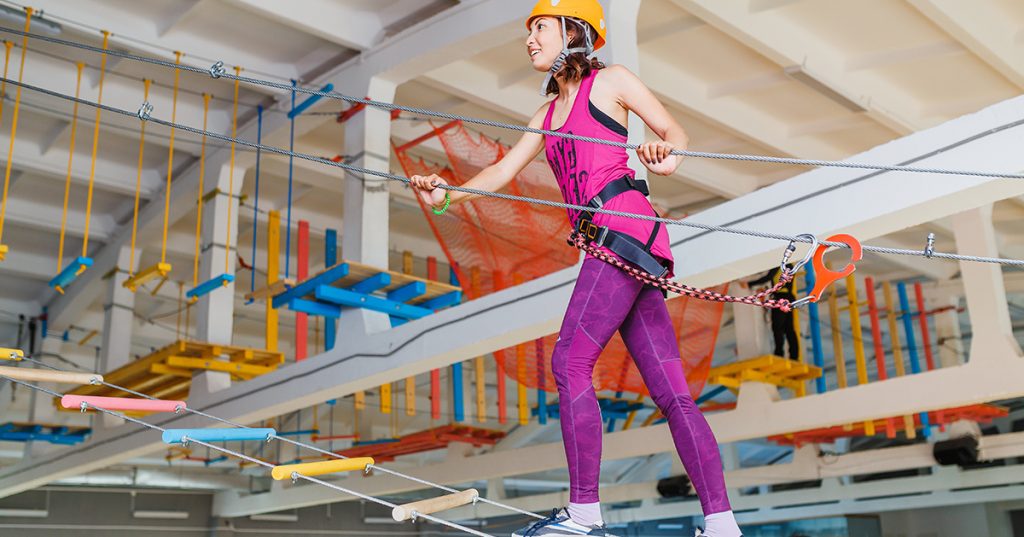 Recently, I put together a team building program in an adventure park. It is difficult for me to conceptualize something without doing it. So, with all the courage I could muster, I walked into the Bedford Urban Air Adventure Park and asked one of the stellar team members to help me go through each attraction.

I felt like I needed to take this approach because as an overweight, over 50, female, I figured I might be the target market for adult team building in what we might perceive as a “kid’s place.” I feel like I am an adventurous soul. However, I was unprepared for the range of emotion and learning that came of my day.

Full disclosure, I’ve only ever seen a “ninja warrior course” on TV. How hard can it be? The answer is… Darn hard! Getting out of the ball pit once you fall in, because you can’t do the 2nd row of the course, was the most difficult feat. I managed the 1st challenge. As a leader, I assessed the obstacles and made my way across the first set of hurdles. The 2nd, more difficult challenge, required bravery as I leapt to grab the barrel that would carry me to the next platform. That leap resulted in an awkward slip, straight into the ball pit which, as I mentioned, was VERY difficult to get out of.  I was embarrassed as this very encouraging team member reached out his hand to help me up. It made me think about the fact that as leaders, we often reach out with encouragement to help lift someone up when they fall. I never considered, until that moment, that we might embarrass the team member or that they feel bad enough to resist help. It was a profound aha.

Each activity revealed one new learning after another. Just like on-the-job training, my coach, the young Urban Air team member, would show me what to do. He made it look so easy as he showed the “job” at hand with each attraction. But every single time I tried to do what he showed me, it was difficult. For instance, there was this thing where you jump, jump, jump, and then land over on a big fluffy, easy to land on, area. When my coach showed me what to do, he even did a flip. He said, “Just turn on to your back or land on your tummy.” My gosh, I jumped, jumped, jumped, and the thing I was supposed to land on seemed to move farther and farther away! I managed somehow on the second or third try to flop onto the landing spot. Thank goodness, that fluffy thing was easier to get out of than the balls. I must say, I was feeling insecure about my ability to perform well. And again, I was reminded how new people must feel in a new job role!

The climbing wall proved to be the biggest surprise of all. Picture this: I’m harnessed onto a string that, as I learned later, creates an easy controlled landing. There are now 3 team members from the staff cheering me on. Although I’m feeling somewhat defeated, I can approach new challenges. After all, conquering hard stuff builds character, right? Up I go. My coach says, “Now think about it, consider where you want to go with your feet and hands.” I’m thinking about it, all right! It kind of hurts my feet. Later, I watched a bunch of young people who didn’t hang in one place for a long time thinking about their next step. I bet their feet didn’t hurt. Anyway, I get about one-third of the way up the wall and my heart pounds. Where did that come from? With each step, I become more and more anxious. One of the team members yells, “Don’t look down!” Do you know what I did? You got it, I looked down! I’m a little more than halfway up the wall and stop.  NOPE… I can’t do it.  I’m negotiating with the kids on the ground who are encouraging me, “You’re almost there, keep going!” I refuse to go another step and grumpily inquire about how to get down. That’s when I learned about the controlled landing. Notice, I didn’t use the word graceful. As I lay on the floor, trying to slow my heart rate, I’m thinking, “How am I going to convince grown-ups this is something they should do?” I’m feeling like such a failure. Why couldn’t I keep going? What made me refuse to do my job? There was no reason to stop going. The harness kept me from falling, I had a firm grip and the ability to get from rock to rock. But my heart was pounding. It was a brand-new experience that was extremely uncomfortable.

Then I realized adults are comfortable doing the things they know to do. We stick with the comfortable stuff and get good at doing what we do over and over.  We are comfortable asking others to do what we are comfortable doing, even if they’ve never done it before. As a matter of fact, we can (maybe I should speak for myself) grow impatient when people don’t scale the walls we ask them to climb fast enough or go high enough, no matter how much we cheer them on or show them how. At that moment, I thought, I must keep trying.

There were more harnessed attractions. The ropes course was next. A few team members went ahead of me to show me how to step from one shaky obstacle to the next. I completed the “short” way around! I jumped out “fearlessly” on to the zip line. I must admit that was a LOT of fun! Finally, I conquered what they refer to as “The Stairway to Heaven”. My coach said, “I know you can do this. It’s just walking.” I’m a good walker and so, with each step up, up, up, I climbed higher and higher. I was so proud to make it to the top… I had the same heart-pounding experience I had on the rock wall but somehow managed to just keep going. I was taken aback though when I learned I had to jump down. Now, I don’t know if it’s 15 or 20 feet in the air… feels like it might be 100, but JUMP Down… really! Again, the harness proved to be safe and secure. The landing is easy; except, I still wound up in an awkward splat, “lay on the floor and recover” position.

I want you to know; it was a great day. I learned a lot about how much time it might take to learn something you don’t know how to do. I learned it’s scary to try something new, even when it looks fun. I learned it is embarrassing to fail or fall or flop or splat! I learned that even when others are encouraging you to win, it may not be possible to win the first time around. (I have since made it to the top of that rock wall!). You see, I was motivated to return. That was the cool part. I wanted to try again. That’s the goal, right? For me the real lessons of the day were:

I challenge each reader to go out and try every adventure in your center. Get up. Go now. And if you are great at your stuff, go try something you’ve never tried before! Write me back. Let me know what you learned. By the way, you can bet I’ll be teaching more about training, coaching, and performance based on the big Aha’s of this Adventures in Leadership™ experience! Mark your calendar for our Business Growth Conference – April 24th/25th at Redemption Plus in Lenexa, Kansas.